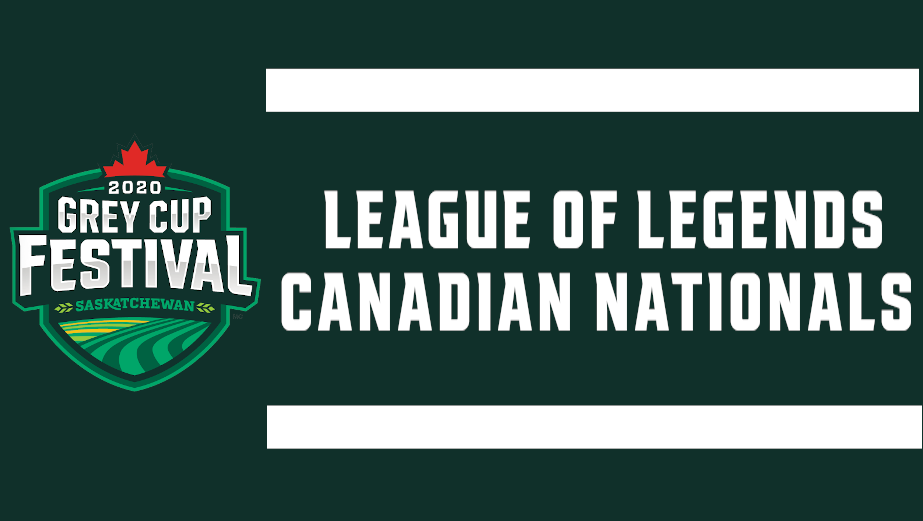 The 2020 Grey Cup Committee is proud to announce it will be hosting the first-ever League of Legends Canadian Nationals Tournament during the 108th Grey Cup Festival, in partnership with SKL Esports.

The online phenomenon, League of Legends, is the largest and most popular Esports game in the world, featuring a 5v5 “MOBA” (Multiplayer Online Battle Arena) in which players (individual or teams) compete in matches, working together to destroy the core structure on the enemies’ base after bypassing and destroying a line of defense.

Each player picks a character that is given unique abilities and strengths for battle, starting at level one with minimal strength, players gain gold and items and as they overtake their enemies, and get stronger, richer and more powerful.

The League of Legends Canadian Nationals Tournament will be taking place leading up to and during the 108th Grey Cup Festival in Regina and will begin in March with the first of four online qualifiers:

Each online qualifier will be a weekend event starting with the group stage on Saturday where the teams compete against one another, with the knockout round on Sunday.  The winner of each online qualifier will automatically be invited to participate in the quarterfinals taking place on November 19 to 21, the weekend of the 108th Grey Cup Festival.

The remaining quarter-finalists will be decided by circuit points given to the top eight teams in each qualifier. From there, the top three teams from the Leaderboard will be given invitations to the quarterfinals. There will be one live last-chance qualifier for teams to win a shot at the quarterfinals, which will be given to the winner of a live last-chance qualifier happening on November 19.   On November 20th, the eight qualified teams will be seeded into quarterfinal brackets and will play to reach the semifinals and finals which will take place on November 21.

Many qualifying teams inquired about travel expenses and the ability to get to Regina to compete in the November tournament. In collaboration with SKL, the prize money has been reallocated as follows:

The remaining $20,000 will be dispersed equally to the eight teams who qualify for the League of Legends Canadian Nationals Tournament, including the winner of the last chance qualifier, to help offset travel and accommodation expenses.

To register for the Esports Tournament please click here

The tournament is open to Canadian Citizens only. For more information, including the official rulebook for the event, visit sklesports.ca/greycup.

For fans of the game who would like to watch the tournament, all qualifiers and finals will be broadcast on twitch.tv/skl_esports. The live finals can be viewed by anyone who attends the Grey Cup Festival.