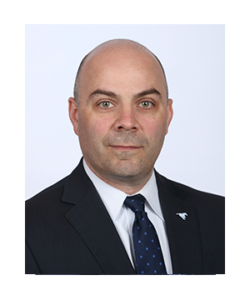 Mike Franco is in his fourth season with the Calgary Stampeders and oversees all of the Stamps’ business operations. He brings a wealth of experience in the sports industry having spent more than 20 years with the Calgary Sports & Entertainment Corporation.

Franco began his career with the Calgary Flames in 1996 as a member of the sales department. In 2001, he took on the leadership of the ticket operations and customer service departments for the organization, taking great pride in connecting with season-ticket holders and working with his team to earn renewals. He shifted his focus to growing attendance through tickets sales as director of sales in 2003. Franco believes fans don’t simply attend games but rather “experience” them and was instrumental in the development of a number of premium experiences for the Calgary Flames. The development and introduction of the Top Shelf Experience, Goal Judge Experience, Captain’s Suite and most recently the Flames Alumni Dressing Room Experience were pioneering in the NHL. In 2013, Franco added the management of luxury suites at the Scotiabank Saddledome and McMahon Stadium to his responsibilities. Franco also led the season ticket and group sales efforts for the Calgary Hitmen, Calgary Roughnecks and, starting in 2012, the Calgary Stampeders.

Franco was instrumental in bringing the 2019 Grey Cup to Calgary and was appointed Chair of the Grey Cup Festival in 2018. In his position, Franco will direct the overall vision, strategy, planning and execution. Collaborating with the CFL, he will oversee the local organizing team to ensure a successful 2019 Grey Cup.

A born-and-raised Calgarian, Franco graduated from the University of Calgary with a degree in Physical Education in 1995. He served as an integral member of the executive committee for the Calgary Flames Charity Golf Classic for more than a decade. He is currently the chair for the Calgary Italian Open with Mark Giordano. He is an active volunteer hockey coach and he spent two years as a board member of the Lake Bonavista Hockey Association.

Franco lives in Calgary with his wife Kathleen. They have two young children — Nicolas and Sofia.