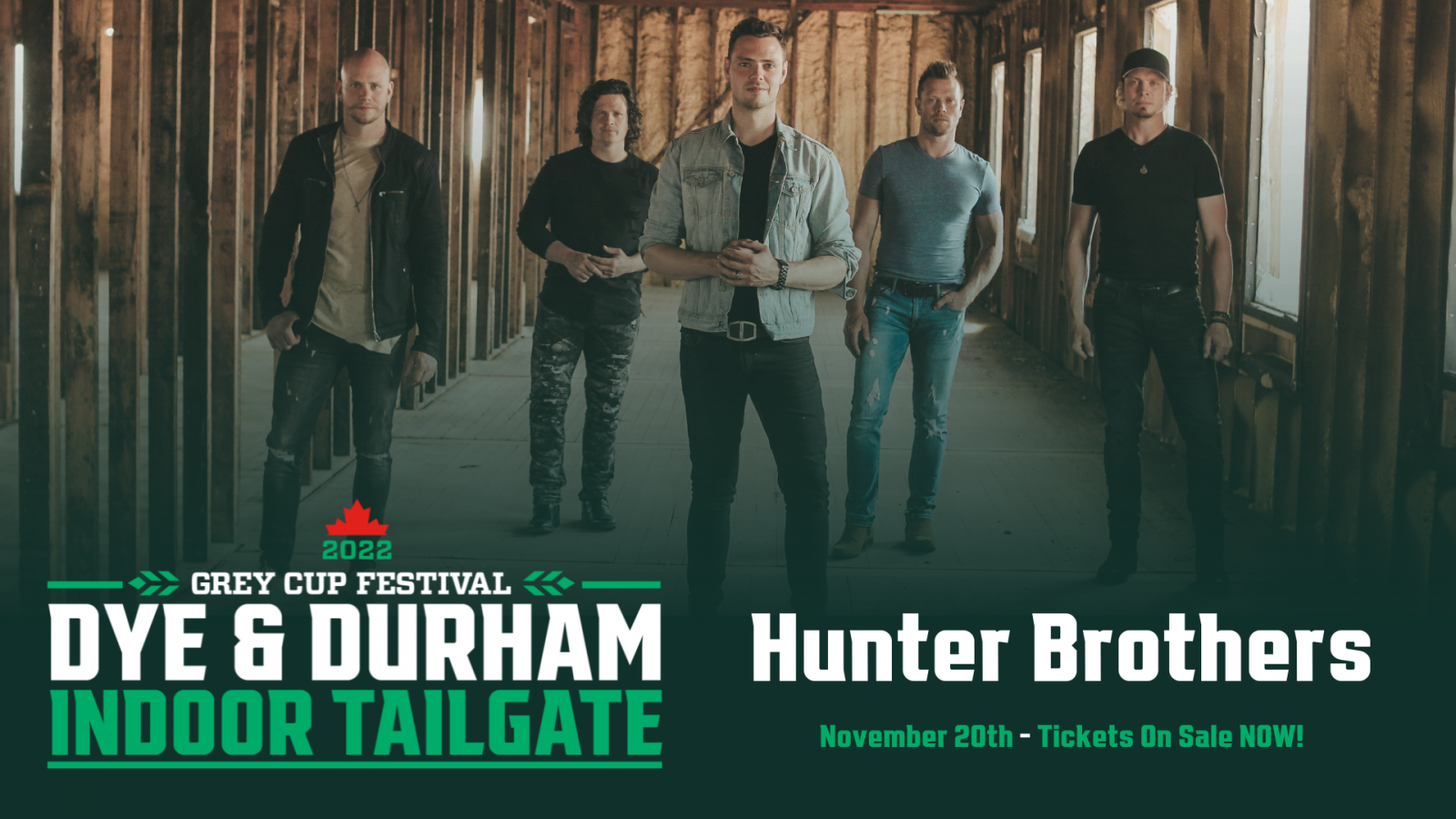 The Saskatchewan Roughriders and the 2022 Grey Cup Festival Volunteer Host Organizing Committee are excited to announce the Hunter Brothers as the headline act at the Dye & Durham Indoor Tailgate.

“The Indoor Tailgate Party is sure to be electric with the Hunter Brothers rocking out on stage as the headlining act, and we’re proud to be a major sponsor,” said Wojtek Dabrowski, the company’s Chief Communications Officer. “For over a century, the Grey Cup has been Canada’s sporting event of the year and we can’t wait to kickoff pre-game celebrations with football fans from across the country in the great city of Regina.”

Tickets are on sale now for this much-anticipated pre-game party, where thousands of CFL fans will gather one last time before heading to the 109th Grey Cup championship game at Mosaic Stadium. The party gets started at 12 p.m. at the Viterra International Trade Centre and caps off the week-long Grey Cup Festival celebration. Live entertainment, food and refreshments will create a party atmosphere that will pump up the crowd.

Real-life brothers J.J., Dusty, Luke, Brock and Ty, who hail from Shaunavon, Saskatchewan, will have CFL fans singing at the top of their lungs to the new Peace, Love & Country Music single released in June 2022. Just like the Grey Cup Festival brings CFL fans together, this hit single brings a message of comradery in today’s complicated world.

“To be part of the festival after growing up right here in Rider Nation is incredibly exciting for us and we can’t wait to perform in front of thousands of CFL fans ahead of the big game,” said lead singer Ty Hunter. “We are hopeful that our new song, and our entire tailgate performance, brings exactly what it says as we unite for the 2022 Grey Cup Festival — peace, love and some good country music.”

“No matter what CFL team colours fans wear, we will all unite as we bring it to the heartland this November,” Reynolds said. “We are thrilled to be able cap off the festival with our province’s own Hunter Brothers who we know will bring one more slice of Saskatchewan pride and an incredible party atmosphere to all the fans at the Dye & Durham Indoor Tailgate.”

Tickets are $104 and are available at greycupfestival.ca. Fans are encouraged to purchase tickets early to secure their spot for this highly anticipated event. Roughrider season ticket holders should check their email for a special offer.

The 109th Grey Cup is now 99% sold and kicks off at Mosaic Stadium on November 20th at 5 p.m. Event details, tickets and additional information are available on the Grey Cup Festival website.