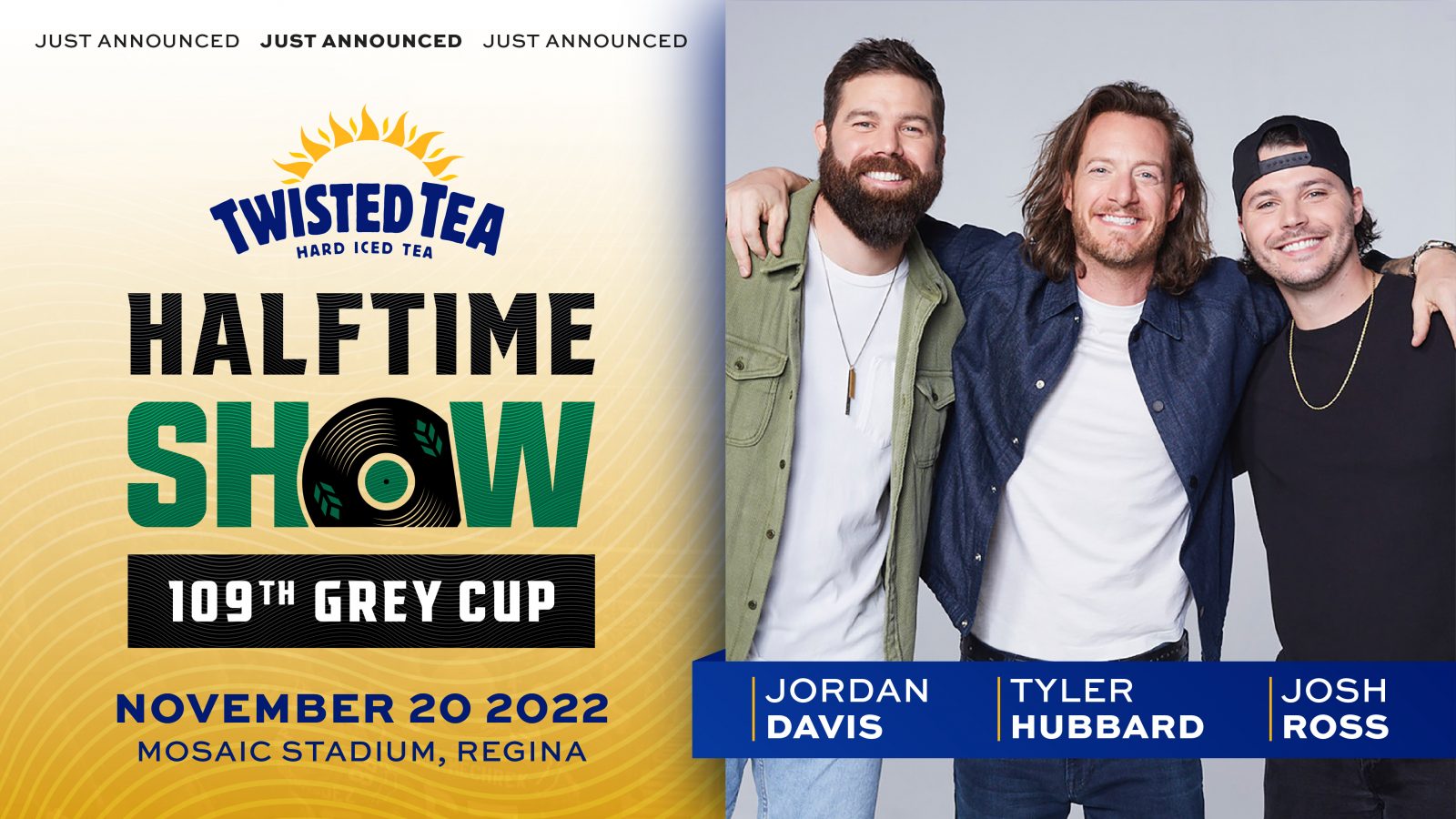 A trio of country music’s shining stars will unite for a one-time-only collaboration for this year’s Twisted Tea Grey Cup Halftime Show. The Canadian Football League (CFL) will welcome Jordan Davis, Tyler Hubbard of Florida Georgia Line, and Canada’s own Josh Ross to the stage at the 109th Grey Cup from Saskatchewan’s Mosaic Stadium on Sunday, November 20. The championship contest and the halftime spectacular will be broadcast live on TSN and RDS – Canada’s home of the CFL.

The headliners were unveiled on this evening’s edition of CTV’s etalk, as the league prepares for the Playoffs with all roads leading to Regina.

“It’s always great to play in Canada, and I can’t wait to soak in the energy and vibe of Grey Cup,” said Davis. “Canadian music fans are some of the best in the world. Playing for them, especially with Tyler and Josh, will make for an incredibly special night that I’ll never forget.”

The Shreveport, La., native recently reached No. 1 for the fourth time, with the title track off his 2021 EP, “Buy Dirt (feat. Luke Bryan).” The triple-Platinum hit has been nominated for Single, Song and Event of the Year at both the Country Music Awards and the Academy of Country Music Awards. The single joins a trio of tracks from his debut album Home State – “Singles You Up,” “Take it From Me,” and “Slow Dance in a Parking Lot” – which have reached the top of the charts. The winner of Best New Country Artist at the 2019 iHeartRadio Music Awards is also a two-time nominee for the Academy of Country Music’s New Male Artist of the Year and Billboard’s Top New Country Artist in 2018. His current single, “What My World Spins Around” was recently certified Gold in Canada. Davis will join Thomas Rhett’s Bring The Bar To You Tour for ten arena dates across Canada beginning February 23 in Vancouver.

Tyler Hubbard echoed Davis’s sentiments when reflecting on the opportunity ahead.

“It’s an exciting opportunity to be asked to play the halftime show for such a huge event like the Grey Cup. I love playing in Canada because the fans always bring a great energy to the shows, so performing my music for the country music fans and for the passionate football fans is going to be quite an experience! I’m really looking forward to being a part of this iconic event.”

With 19 No. 1 singles on country radio, countless awards, and sold-out tours, Tyler Hubbard has already had a remarkable career as a prolific songwriter and as one half of the multi-Platinum duo Florida Georgia Line. Now ready for the next chapter, the Georgia native is embarking on a solo career with his debut solo album, Tyler Hubbard, releasing January 27, 2023. Hubbard’s debut solo single, “5 Foot 9,” has already reached No. 1 at radio in Canada and has 185M global streams. In anticipation of his debut solo album, this past summer, Hubbard released a six-song project, Dancin’ In The Country, which already has over 200M global streams. Hubbard wrote or co-wrote all of the 18 tracks on Tyler Hubbard, teaming up with some of Nashville’s most prominent hitmakers.

The pair will be joined on the Twisted Tea Grey Cup Halftime Show stage by Burlington, Ont., native Josh Ross, whose performance will be the realization of two childhood dreams. 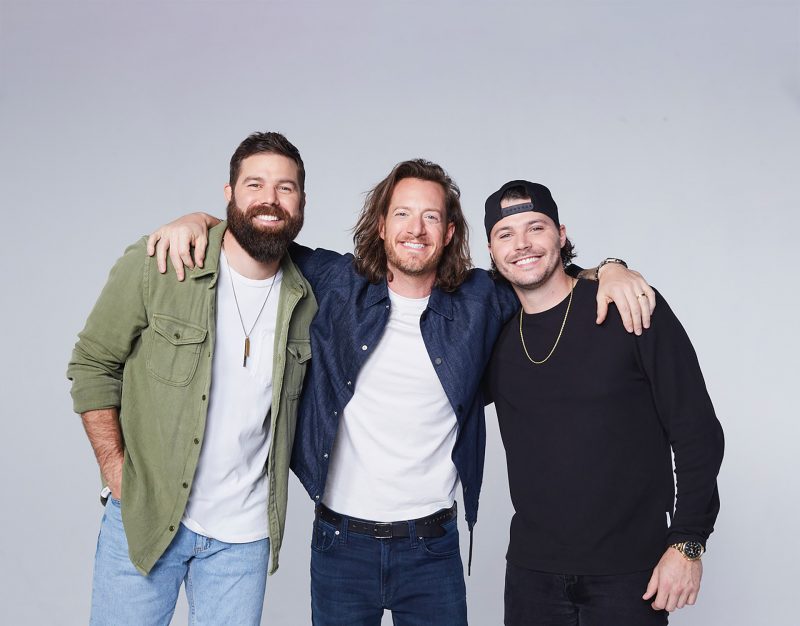 “Growing up, football was everything, and like so many young Canadians, the Grey Cup was the goal. Injuries led me on a different path, and now, music is my greatest passion and the stage is where I’m living my dreams. So to see these two paths come together, and lead to Saskatchewan – life is funny sometimes, but it’s also perfect.”

The former Western University Mustang defensive back made his major-label debut with “On A Different Night,” before following it up with the summertime anthem “Tall Boys” and the Gold-certified ballad “First Taste of Gone,” which found its way onto the Top-5 Canadian Country Music Charts and entered the Canadian Hot 100. Nashville-based, Ross was nominated for 2022 Rising Star at the Canadian Country Music Awards.

The trio’s special collaboration has been made possible through the CFL’s ongoing partnership with Universal Music Canada, which has featured in-game broadcast music, a stadium concert series and collaborations with the league’s nine member clubs.

The 109th Grey Cup represents the second year in which Twisted Tea – the Official ‘Ready-to-drink’ beverage of the CFL and Grey Cup – has brought together music and sport to delight and excite CFL fans, following an unforgettable showing by hometown heroes, Arkells and special guests The Lumineers at the 108th Grey Cup in Hamilton.

“Music and football go hand-in-hand,” said Trevor Grant, Vice President of Marketing and Sales of Moosehead Breweries LTD, which markets and distributes Twisted Tea in Canada. “Music forms the soundtrack of our lives, and Jordan, Tyler and Josh will be the perfect soundtrack for this year’s Grey Cup.

“Twisted Tea couldn’t be prouder to play such an important role in bringing Grey Cup – one of the largest events on the Canadian sporting calendar – to life with an unforgettable evening of action, entertainment and music.”

The 109th Grey Cup will be played in Regina at Mosaic Stadium on Sunday, November 20 with kickoff slated for 5 p.m. local/6 p.m. ET. The sold-out contest and the Twisted Tea Grey Cup Halftime Show will be broadcast live across the nation on TSN and RDS – Canada’s home of the CFL.

The 2022 Grey Cup Festival will be a province-wide celebration of the game as fans, media and the Canadian football community gathers in anticipation of the country’s largest single-day sporting event – the Grey Cup. Events open on Tuesday, November 15 in Saskatoon before moving to Regina from Wednesday to Saturday.